In one album after another, Ian William Craig seeks to capture the texture of memory and absence. His last album was recorded at his grandfather’s house, over a two-week period which was marked by two tragic events: an apocalyptic fire which surrounded the town, and the death of his grandfather.

If, as I believe, the value of a musician depends upon the uniqueness of his sound universe, then there is no doubting the greatness of Ian William Craig. Few artists find a language so personal that a mere two seconds of listening suffice to identify it.

Canadian Ian William Craig is a trained opera singer who has never performed in an opera. Dying while singing Mahler’s « Das Lied Von Der Erde » with a choir would, however, feels to him like a fitting end. “A romantic and glorious death would be perfect”, he says in an interview with the Quietus – a remark which is perhaps surprising, coming as it does from an artist who composes and records in such a solitary and self-sufficient manner.

Alone, and on a small, personal device, Craig records albums of a choral grace and an orchestral breadth. His instruments are simply these: his own voice, a sampler, some piano or synthesizer sometimes, and above all, magnetic tape. Craig sings like an angel, recording himself and creating loops which he completes with cascades of harmonics. He is a one-man choir.

The process would not be particularly original without these magnetic tapes. Craig exploits the fragility of the medium in order to make tape his main instrument, alongside his own voice. As is commonly known, the more you record on the same tape, the more the definition and substance of the sound are eroded. It is precisely this degradation that Craig seeks. In concert and in the studio, he starts from scratch – singing a melody, creating a loop of it, and then running it through a full circuit of audio tapes. As the song progresses, the taped sound loses its sharpness and acquires the defective graininess of old cassettes. The voice distorts, falters and fails, in a hail of intermittent and parasitic silences.

Once this sound texture has been obtained, Craig sings over it. A voice always remains in the foreground, but eventually this, too, will mingle with the others: those which become damaged, which disintegrate in the midst of other sounds, and which intertwine in imprecisely synchronised loops. These voice loops merge, fade, and become unrecognizable. Then comes an organ chord: one forthright chord, and then another, as the deteriorating taped sounds continue to spiral and decay behind them.

All of this is to be savoured like something at once bitter, generous and flawed…like distant, departing memories.

While the recording apparatus may seem very conceptual, the result is incredibly sensual. The white noise, and the very breath of the magnetic tape, caress the listener. One plunges into Ian William Craig’s music as one would plunge into oneself: in search of recollection, and wrapped in a serene nostalgia.

A superb video gives limpidity to what might otherwise have seemed complicated. We see Craig at work, alone in front of his device, gradually spinning a ghostly and luminous choir out of one high note, sung like an angel.

Red Sun Through Smoke is Craig’s twelfth release. It was recorded over two tragic weeks.

Here is the story.

It is August 2019, and Craig has committed to recording an album. He chooses to do so in an isolated place. It is somewhere full of memories for him: his grandfather’s house in Kelowna, a small town surrounded by forest in British Columbia. His grandfather, suffering from dementia, has for years been living across the street in a medical facility. While working on the recording, Craig can visit his grandfather and use the piano that no one has touched in ages. After a few days of work, however, Craig receives a call from his parents: his grandfather is in palliative care. This is the end. The parents come to join their son and urge him to continue recording his album: life must go on. Craig’s grandfather dies after a week.

Throughout this already harrowing sojourn, Kelowna is surrounded by a cataclysmic fire which turns the sky grey and the sun red: red sun through smoke. It is the fire and smoke which have precipitated the grandfather’s demise: the older man’s lungs couldn’t take the burden.

Through all of this, Craig continues his work, taking refuge in the love that he feels for a young woman – a love requited, as he only learns with the young woman about to leave for several months in France.

Far, and then Farther.

This is a lot to cope with.

Everywhere in this magnificent album can be found mourning, the anguish of death, and love both happy and thwarted. The album is the fruit of tragic circumstances – circumstances nevertheless apposite for Craig’s inspiration and creative methods. His aesthetics of failing memory, serene disintegration and oblivion are imbued, in Red Sun Through Smoke, with very special meaning.

From the very opening of the album, Craig surprises: firstly, with a relatively raw a capella song for which he leaves his sound apparatus aside. Relying on his powerful voice without the tape process for the first time, Craig sings loud on this track, “Random” – the scream is never far away, and the tone is set. The album will be as personal as a diary, as moving as the loss of a loved one, and « Weight », a ballad played on the piano, confirms this note of intention. Its simple and melancholic arpeggios remind us of another great record on mourning: Carrie & Lowell by Sufjan Stevens. Then comes « Comma », which beautifully exemplifies Craig’s aesthetics, giving us a choral loop which disintegrates with each appearance, its increasingly rocky texture contrasting more and more with Craig’s heart-rending falsetto. Later, in « Supper », Craig sings in a fragile voice: « We had grief for supper ».

Between two songs about mourning, we are deafened by the mortal threat of fire. Three minutes of abrasive drone in « Condx QRN » lead to a climax with Dantesque accents: in « Open Like A Loss”, saturated guitars thunder forth without warning, and mingle with Craig’s seraphic incantations.

Ian William Craig’s mourning continues in a work twinned to this record: a poignant video montage of old family tapes. His entire album serves to accompany these images. To make the film, Craig treated the images in the same way that he treats the sound: by playing on the disintegration, the partial erasure that comes with reproduction, and with the reproduction of the reproduction.

Intimate and epic, Red Sun Through Smoke is a powerful record, steeped in love and grief, darkness and hope – a record of mourning, to be placed on the same altar as Carrie & Lowell, Nick Cave’s Ghosteen or Connor Long’s Niagara Falls, which was released last week. 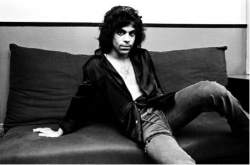 Little Richard was born this day in 1932 in Macon, GA.

🟨 Can we all agree that this is Metallica's worst album cover? https://bit.ly/3F7Hy1Y

The Montreux Casino in Switzerland burnt to the ground during a Frank Zappa show. The incident is immortalized in Smoke on the Water. Deep Purple was attending the Zappa show. December 4, 1971.